The photo above is the best shot I could get of Guadalcanal, Solomon Islands as we passed by yesterday morning.  We were several miles offshore and even from that distance, the terrain looks nearly impassable let alone to try and make an amphibious beach assault, advance against a determined and fortified enemy, and even be able to move equipment and supplies forward.  Yet that is exactly what the U.S. Servicemen did here during WWII.  Their accomplishments are even more amazing after seeing this place in person even from this far away.  I give the fullest respect and honor to those who were here and fought. 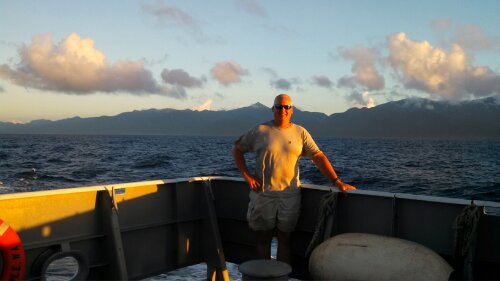 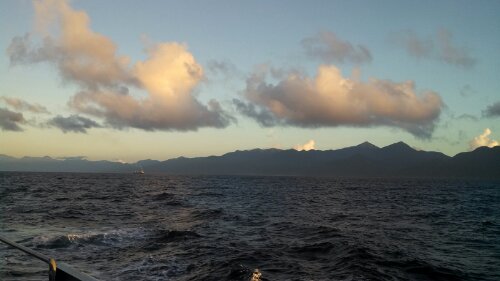 In other news: I received the dreaded phone call from home yesterday and will be cutting the trip short at the next port in a couple days.  My mom is a fighter and I’m going to go be with her and whip her into shape and get her back to her fighting weight very soon.

You all be good while I’m away!
Todd

Just before I shipped out in early January, I made  stop at at The Stag Barbershop in Snohomish, WA (my hometown). Bob, my barber for years and ex-marine, knows how to make it “high and tight”.  He rounded the edges more than normal to make it easier for the next person who cut my hair.

The next time, was me.  It worked O.K. but could have been much better.
This time, Orlando, one of my shipmates and retired Navy took it down for me.  He did a pretty good job. 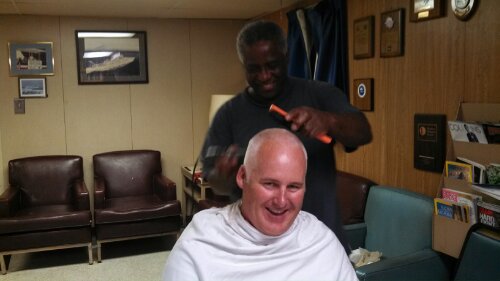 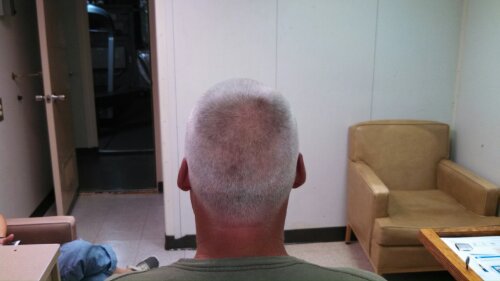 Still, one more thing to look forward to when I finally get off this steel beach…..a real haircut from the Marines.

Really that’s how the report should read but there really is more to the story.  One day out of Nouméa we went through an enormous school of yellowfin tuna feeding and birds diving.  The ship steamed right through the middle without even slowing down.  I watched some really nice tuna feeding as we cruised through.  Our one handline never got touched.

A few days later in St. Georges Straight, Solomon Islands, we were on station recovering a science mooring in a downpour.  The tunas were feeding a couple hundred yards off the stern as we worked away.  I think its God’s perfect torture for a fisherman.  Tease him while he can’t put out a line.

A few days later in the Bismark Sea, Papa New Guinea, while sitting on a CTD station a very large blue or black marlin jumped three times not 100 yards off of our port side as if to say “piss off, you can’t catch me”.

The next day while steaming towards Vitiaz Straight , Papa New Guinea on a beautiful evening, I again put out the handlines while steaming 12 knots.  A nice marlin whacked one of the jigs a few times before we watched him fade away.

Twenty minutes later a very nice bull mahi mahi was hooked.  I was able to gain some line while the fish was skiing on the surface.  When the fish was able to get his head down, I couldn’t hold any line even wearing gloves.  The line would rip right out of my hands.  One of the other guys hailed the bridge on the squak box to please slow down.  Our new (new to the ship) chief mate didn’t know what to do and it took a couple minutes for him to start slowing down.  Just as the ship slowed, the mahi came loose and got away.

The next day, after a long day of recovering two science moorings in blistering humid heat, I decided to take the night off from fishing and enjoy an evening of air conditioning.  One of my shipmates set out a few lines and one got worked by a nice marlin.  The marlin got away with the hook and jig.

We’ve been putting our hooks in the water and getting some action, but this science group planned their whole cruise around hauling ass at flank speed from station to station and our opportunities have been fairly limited unless we want to fish at 12 knots (not really…six would be better).  If we had a week or two down here with a sport boat, I think you could put up some pretty impressive catch numbers on a mixed bag of game fish.

A very special mention goes out the very rare oarfish that made an appearance off of stern one afternoon as we were just about to bring the last item onboard from a science mooring.  As we looked into the water at the deep color of the instrument, it appeared there was a wad of line tangled in it.  As we brought the instrument closer the was slowly unfurled itself and slowly swam away just five or six feet below the surface.  I could see all of the vibrant reds, blues and silver colors and the long fin that runs along the back.  This one was 12′-15′ in length.  They can get up to 40′ in length.  Not much is really known about them and it is very rare to see one alive.  We’re pretty lucky I suppose, even if we have no “meat in the box”.

Hopefully the next fishing report will have some fish pictures to go with it.  Until then, stay classy.

Our last science cruise to the Samoan Passage, we spent a lot of time sending instruments to 5,200 meters.  The pressure at these depths is intense. 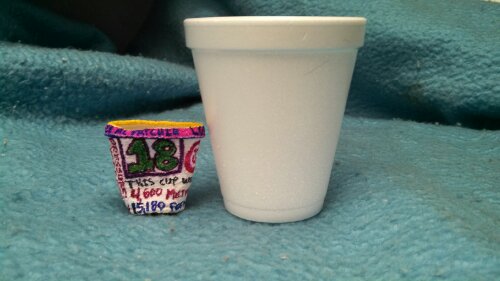 The cup on the left was made as a present for my daughter’s 18th birthday.  It started as a normal cup like the one on the right.

The pressure affects the science operations as well.  The moorings can use floats made of dense foam.  The problem is they are very expensive.  The more common method is to use a series of glass floats encased in a hard plastic shell called a hardhat.  Each glass float provides about 50 lbs. of lift and is rated to 6,000 meters deep.  They are set up in series like this:

Some moorings may use several series in different locations on the mooring line, for example to keep an instrument in the correct position.  Sometimes, even though the deepest we went was 5,200 meters, the floats implode from the pressure.  This is what they look like when they implode: 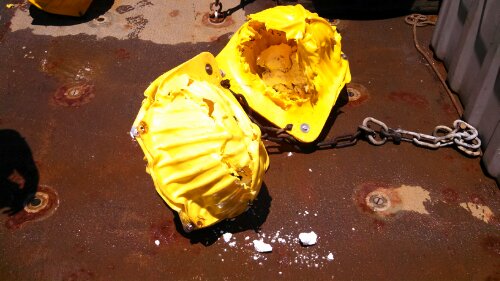 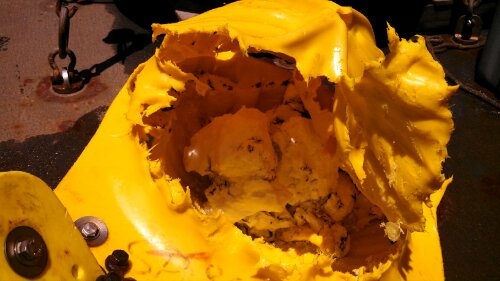 The remnants of the glass float inside the hardhat looks like a large chunk of salt: 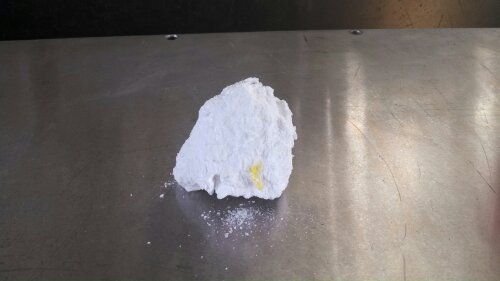 Sometimes we get little shards of plastic back impregnated in the glass.

Pretty cool to witness.  That is all for today’s lesson.  Carry on.

Dedicated to the ugly ships of this world.

Comments on: About Us

She sails the seven seas in search of FREEDOM

The photos and musings of a Tugboater

Back To Sea With Me